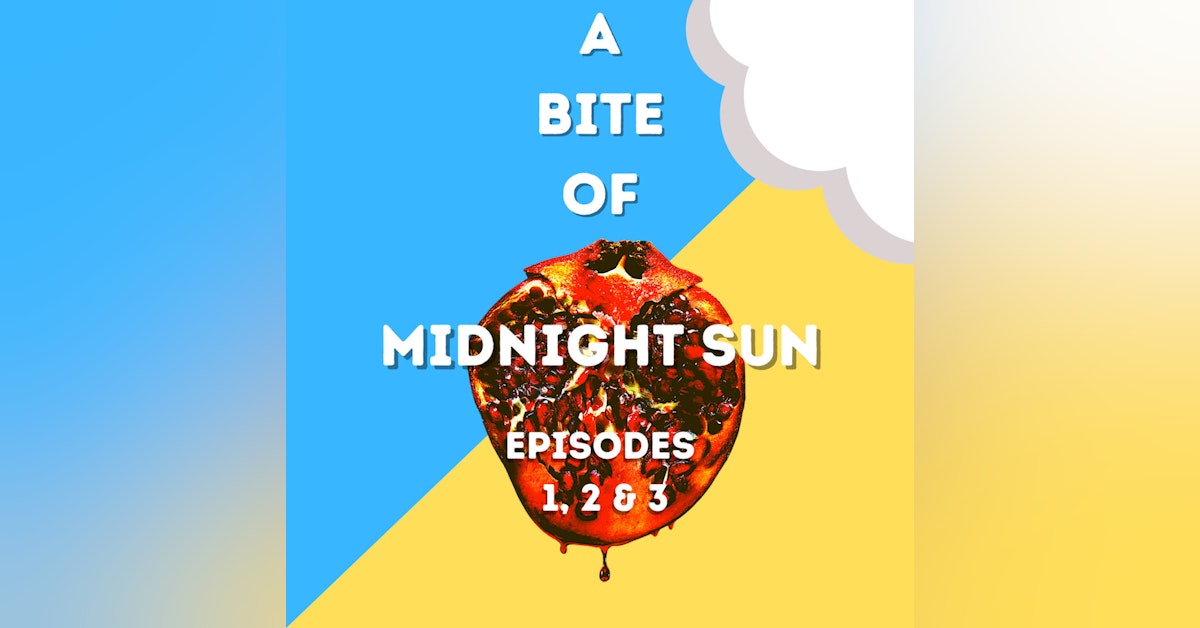 On the season one premier Derek & Noah are Forks-ing excited to sink their teeth into Chapters 1-5 of The Twilight Saga: Midnight Sun! Is Edward's blossoming interest in Bella cute or just reaching a new level of creeper status?
__
Thanks for listening to 'A Bite Of'! Still want more? Check out the links below and connect with us we can't read minds like Edward!!

Chapter 1 - 11:56
We meet Edward, Bella, Rosalie, Alice, Emmet, and Jasper. Edward wants to eat Bella and tear her to smithereens. He runs away.

Chapter 2 - 21:34
Edward ran away and has some snowy interaction with Tanya. He decides to head back to school since he can’t stop thinking about Bella. He tests his limits in the school cafeteria and then heads to class to sit next to her. He then ditches Spanish to spy on Bella in gym.

Chapter 3 - 27:55
Edward contemplates running away again - he talks to Carlisle about it on a hunt. He heads to school where he saves Bella from getting crushed by a van. They go to the hospital and she is like, “You’re a liar! Something is up!” and he is like, “Mind your business!”

Chapter 4 - 35:26
Edward deals with the aftermath of saving Bella. The Cullens have a family meeting in their dining/conference room. Rosalie is pissed. Alice tells Edward that she will be Bella’s bestie and that Bella’s future can only have two outcomes - Edward kills her or she becomes a vampire! Edward is not happy.

Chapter 5 - 39:15
Edward gets into cardio. His Bella obsession continues and is therefore tormented. He goes into full creeper mode.

Twilight, the first book in the quartet was released on October 5, 2005. With New Moon coming out in September 2006 followed by Eclipse in August 2007 and finally Breaking Dawn in August of 2008. Meyer began writing Twilight in 2003 after she had an incredibly detailed dream. She writes on her website, “I woke up (on that June 2nd) from a very vivid dream. In my dream, two people were having an intense conversation in a meadow in the woods. One of these people was just your average girl. The other person was fantastically beautiful, sparkly, and a vampire. They were discussing the difficulties inherent in the facts that A) they were falling in love with each other while B) the vampire was particularly attracted to the scent of her blood and was having a difficult time restraining himself from killing her immediately.”

She goes on to write that she had to give life to these characters. Eventually, she found names for them, and then she finally finished the story. She says she steadily wrote epilogues and knew there was a sequel that needed to be written. She sent the first book out for submission and after a few rejections, and a name change (originally it was called Forks - which I think was a double entendre) six months later Twilight was on its way to being published by Little, Brown. Of course, the rest is history and the books became a franchise and the franchise became a series of five movies. The first movie was released on November 21st, 2008.

And according to Fobes, “Overall, the films have earned $2.5 billion at the global box office.”

Flashforward to 2020 and now we finally have Midnight Sun which is Twilight from Edward’s perspective.