An MCU Guide for 'The Falcon and the Winter Soldier' 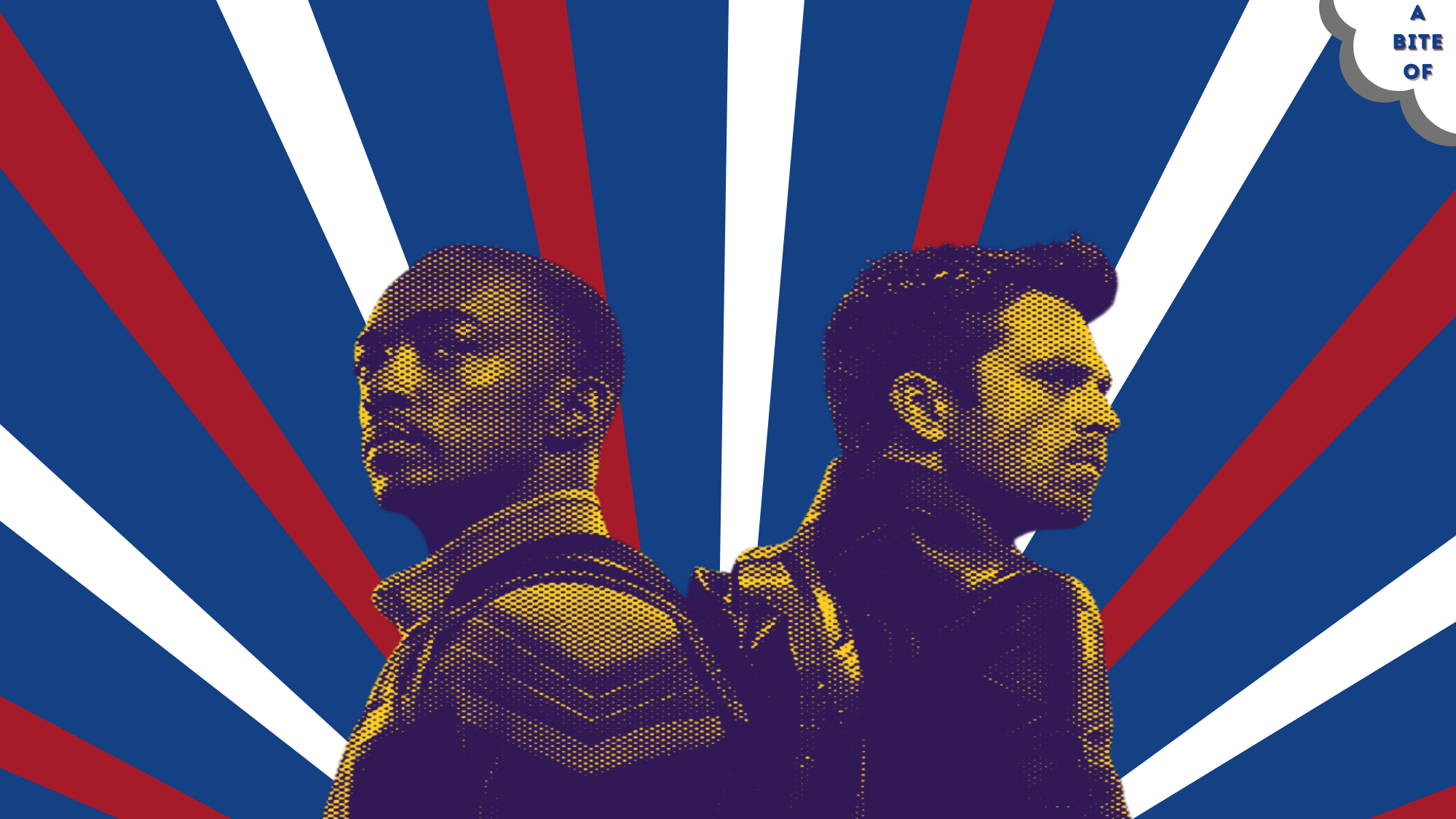 Hot off the heels of WandaVision Marvel and Disney+'s next and newest series The Falcon and The Winter Soldier is days away! Here is your refresher on Sam Wilson and Bucky "The Winter Soldier" Barnes history in the MCU so far.

Not only are we introduced to our Star-spangled Captain America, but we also get our first introduction of James “Bucky” Buchanan Barnes. While Steve is still a shrimp and failed many times to enlist in the Armed Forces, Bucky is his best friend and protector, saving Steve when he fights bullies bigger than himself. After Steve gets his Captain America glow-up, he finds out Bucky has been declared dead after not returning to base after a mission. But the truth is he’s been captured. Steve, with help of Peggy Carter and Howard Stark, rescues Bucky and leagues of other prisoners from a Hydra base. Steve, Bucky, and a few more of the rescued then form a team called the Howling Commandos and stop Hydra in their tracks. Tragedy strikes, however, when Bucky is seemingly killed after falling off a fast-moving train in the Swiss Alps. Damn that Zola! During Caps movie we get a good look at who Steve is and how important Bucky is to him.  Bucky is strong, fiercely loyal, and always making sure his dates have friends for Steve. When the Howling Commandos were founded, Bucky followed Steve into battle not because he’s Captain America, but because he’s the same kid Bucky knew back in Brooklyn. Their bond, built over years of caring for one another, is one of the highlights of the entire MCU, how doesn’t love a story about best friends?

After Steve took a long 70-year nap on ice, formed the Avengers, and stopped an alien invasion he’s taken on working with SHIELD. A new baddy comes into town, The Winter Soldier: an intense metal arm, gorgeous hair, and a smokey eye...I mean he poses a big threat, this guy can fight! To stop this new threat, Steve gets help from Black Widow and his running partner Sam Wilson, a former Air Force pararescueman. As the trio put two and two together they find out that Hydra has been growing within S.H.I.E.L.D., but that's not all...Bucky Barnes is the Winter Soldier!

Turns out, Bucky survived the fall off the train due to various experiments performed on him during his imprisonment. After Hydra rescued him, chief scientist Arnim Zola brainwashed Bucky, gave him a killer metal arm, and was used to accomplish Hydra's various plots and assassinations across decades.

Steve, Sam, or should we say Falcon, and Natasha Romanoff enact their plan against The Winter Soldier and Hydra. Cap and Bucky have an amazing fight on a very high catwalk (why are intense fights always on catwalks?) and both are nearly killed as a result. But a part of old Bucky might be in the brainwashed Winter Soldier as he saves Cap from drowning in a river. After Cap heals from his wounds, Sam and he start to search for Bucky, who ends up leaving Hydra and Steve behind and goes into hiding; in an after-credits scene, Bucky takes a look at a museum exhibit with his face on it.

Among other things, The Falcon is in the MCU! The Winter Soldier is Sam Wilson’s first live-action appearance, and we get to see why Cap trusts him. Sam is good-hearted and dependable—not to mention that wingsuit! As The Winter Soldier/Bucky things aren't as easy. For 70-plus years, he was a brainwashed Hydra murder machine. Seeing his old best friend Steve seems to chip away at this and loosen Hydras grip. Winter Soldier is the start of Bucky’s road to redemption.

I know, was Sam or Bucky even part of this? Yes, Sam was, for about one minute. After Baron Strucker was dealt with, Tony Stark hosts a get-together at the new Avengers Tower. Steve brings Sam and they talk about their “missing persons” case. Which we know is Bucky.

It lets us know that while Cap is saving the world and dealing with big threats, Sam is out there looking for their long-lost metal boy. Who to no one's surprise is very hard to find.

Sam is a full-blown Avenger now! Yay! He faces off against Ant-Man and ends up “losing”. Instead of going after him, Sam keeps tabs on him just in case he's needed...wink wink.

Instead of trying to square up to Scott Lang again, Sam sees potential in Ant-Man, I’d say that's pretty Avenger-like. This turns out to be a good thing because Sam and Steve will need more support in the soon future.

At the beginning of the film, we see Bucky defrosted, assassinating, then being put back on ice.

Presently, there are big changes in the world's political landscape after the events of Age of Ultron. The Avengers’ mistakes, although necessary in saving the world don’t go unnoticed, nations come together and create the Sokovia Accords, a piece of legislation that would require superheroes to either register or quit. The day the Accords are being approved, a person that looks like Bucky blows up the United Nations, killing T’Chaka, the King of Wakanda.

Now everyone and we mean everyone wants Bucky, especially T’Challa, who wants revenge. Captain America and Falcon set out to protect Bucky from Black Panther and various government agencies but they all end up getting taken into custody. While being held, Bucky is told "Longing, rusted, seventeen, daybreak, furnace, nine, benign, homecoming, one, freight car." triggering him and he loses it. Steve and Sam eventually get control over him and now they all need to be on the run. Bucky tells them they need to head to Serbia ASAP. With Cap’s shield and Falcon’s wings still being held, they enlist the help of Peggy Carter’s niece Sharon, who gets them their gear. This is where we get the scene of Steve KISSING PEGGY CARTER’S NIECE and the amazing moment of “Can you move your seat up” from Caps best buds. 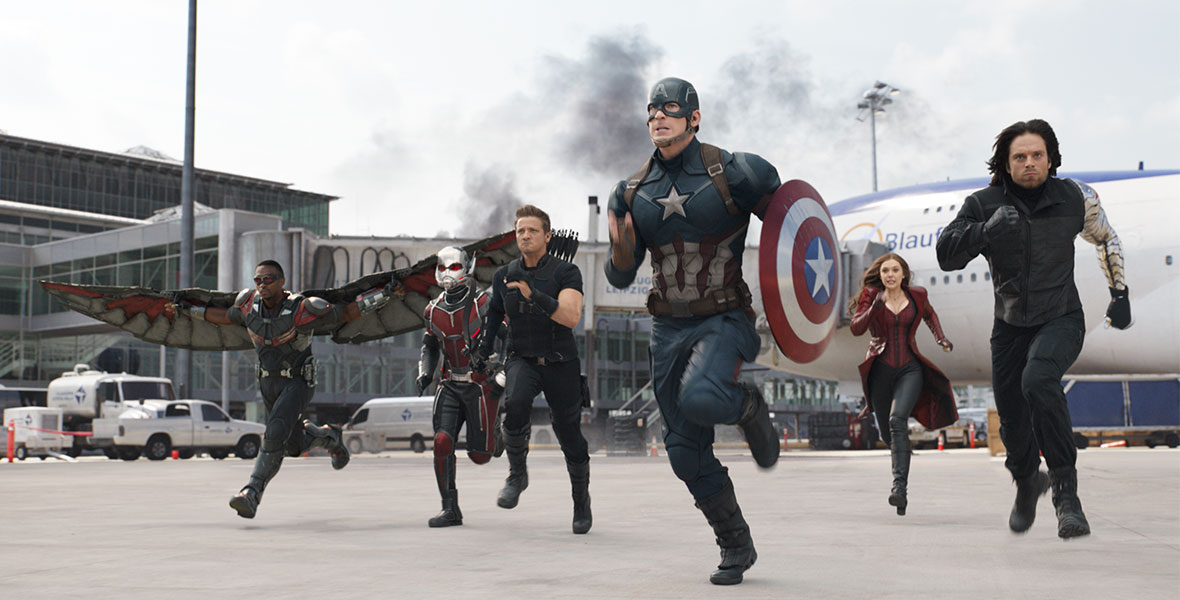 On top of all this, the Accords are in effect and without signing and getting the UN’s approval they are high-profile criminals. Steve and Sam are not for the Accords and with Bucky, they call on Wanda, Hawkeye, and Ant-Man to go against team Iron Man. Falcon allows himself to be captured so Cap and Bucky can escape, but they’re followed by Iron Man. The three of them meet up in Siberia, where shocker Baron Zemo has been behind everything. But that's not all, he drops a big bombshell, those people killed at the beginning of the film? They were Tony Stark's parents! Like anyone would be, Tony is not happy. Iron Man takes on Cap and Bucky in a splash page-worthy fight. In the end, Tony blows off Bucky’s metal arm. Steve takes Bucky to  Wakanda—where T’Challa promises to rehabilitate and protect him. Steve then heads to the Raft, a super supermax prison dedicated to people with abilities.

As the film is so appropriately named the Avengers Fam is divided. But this also furthers Bucky’s road to redemption, even after the realization he killed Tony’s parents. Even though brainwashed, he still has to answer for his mistakes. Even though Steve never gave up on Bucky, “I can do this all day” isn't just ass bad as saying. Bucky sees amazing support from Steve and decides he needs to get help and make sure he isn't a danger to anyone because, you know, he can get triggered into a crazy murderous metal armed assassin.

This one is rather quick, when CIA agent Everett Ross's wounds are being treated in Wakanda, Shuri says, “another broken white boy for them to fix.”. This brings us to the end credit scene. A metalless? Armless? Bucky walks out of a tent, ta-da! The other white boy Shuri mentioned, but he looks healthy and has no smokey eye.

This shows that when Steve brought Bucky to Wakanda, T’Challa and Shuri kept their promise. He seems to be going steady on fixing himself and getting the help he needs, even though this will take some time.

The ramifications of Civil War are still in effect, making most of Team Cap wanted fugitives, but Thanos is enacting his plan so who has time for that? Cap, Natasha, and Sam help Wanda and Vision in a fight against two of Thanos’ Black Order, Corvus Glaive and Proxima Midnight. They head to the Avengers Compound where we meet Professor Hulk. With the impending invasion, the crew all head to Wakanda for their big stand against Thanos. We see T’Challa give Bucky a brand new sleek metal arm for the upcoming fight. Spoiler, our Avengers don't win this one. Thanos gathers all the Infinity Stones and snaps half of all life out of existence. Among those dusted, Sam and Bucky.

When we pick up with our heroes it's been a few years, which means that Cap and Sam got some great bonding time while on the run. Another great plus, it seems like Bucky can finally move past his days as a Hydra assassin and fight for the right cause.

Although for a good chunk of the movie Sam and Bucky are not in it because...dusted. Our star-spangled hero stands before a 2014 Thanos (thanks to some time-traveling shenanigans for our surviving Avengers) and his whole army. Through Caps radio, we hear “On your left,”. Sidenote: The theater I was in when I watched this went bananas, rightfully so! 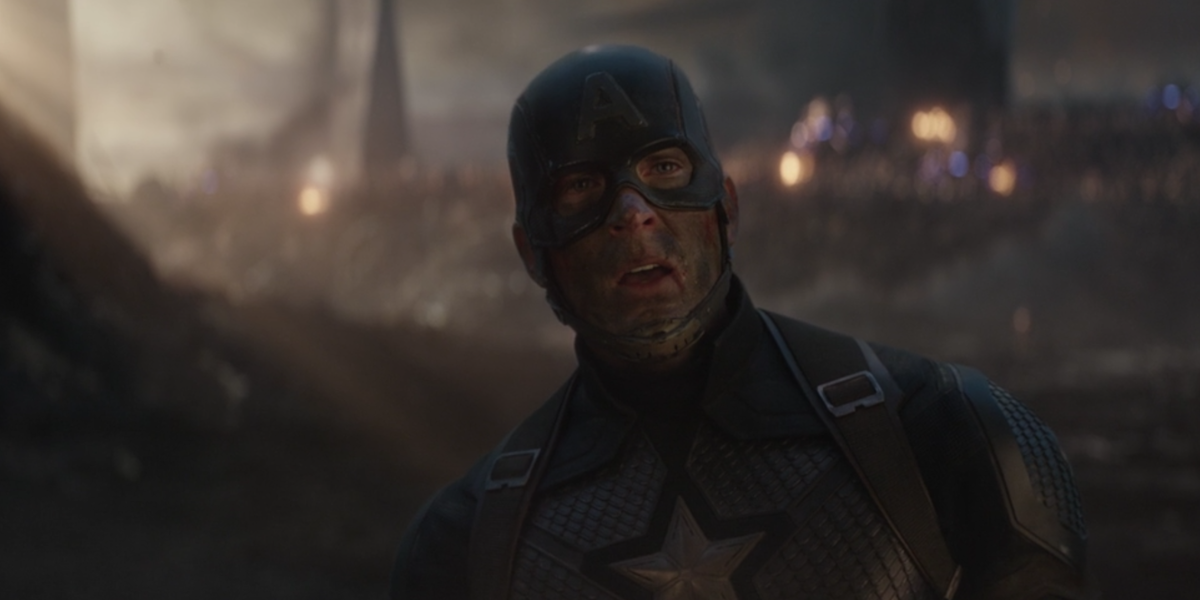 Cap looks behind him and we see portals start to open, Sam makes a great entrance, and all our heroes start to come through, including Bucky! We come to an epic decade climax as our heroes finally triumph over Thanos. But now we know what the 1 in 14 million chance Dr. Strange talked about was. It meant Iron Man had to sacrifice his life and dust Thanos. After Tony Stark’s funeral, we learn that Cap is going to put all the Infinity Stones back in their proper place and time. Bucky and Sam are with Cap when he leaves but before Sam can fully grasp what's happening Bucky notices a familiar figure by the lake. Turns out after Cap put the stones back he settled down with Peggy Carter and had a happy fulfilling life. He absolutely deserved to get his dance with her. With Cap now too old to be the hero we’ve known for so long, Steve chooses Sam as the next Captain America. 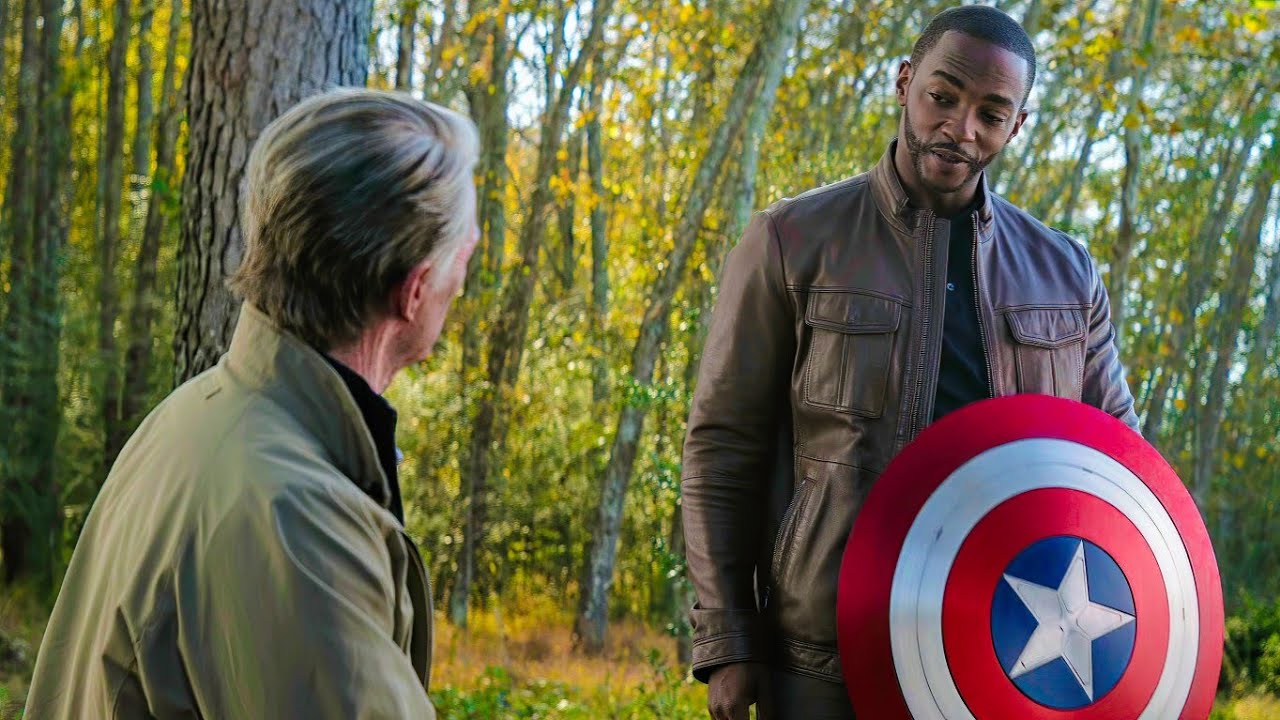 The most important thing to take away from this is that the mantle of Captain America is now being passed on. Many people have debated on why Steve chose Sam instead of his oldest friend Bucky to take the shield. It could most likely be due to his time as a brainwashed Hydra assassin. Although, are we sure that Sam feels worthy? We feel that this is going to be one of the main points of The Falcon and the Winter Soldier, what does it mean to be Captain America, and who will hold the shield?

We hope that this was a great refresher and has made you that much more excited for the series when it drops on March 19th on Disney+! Be sure to subscribe and listen to 'A Bite Of' The Falcon and the Winter Soldier episode by episode break down and recap when the series premiers, anywhere you get your podcasts!