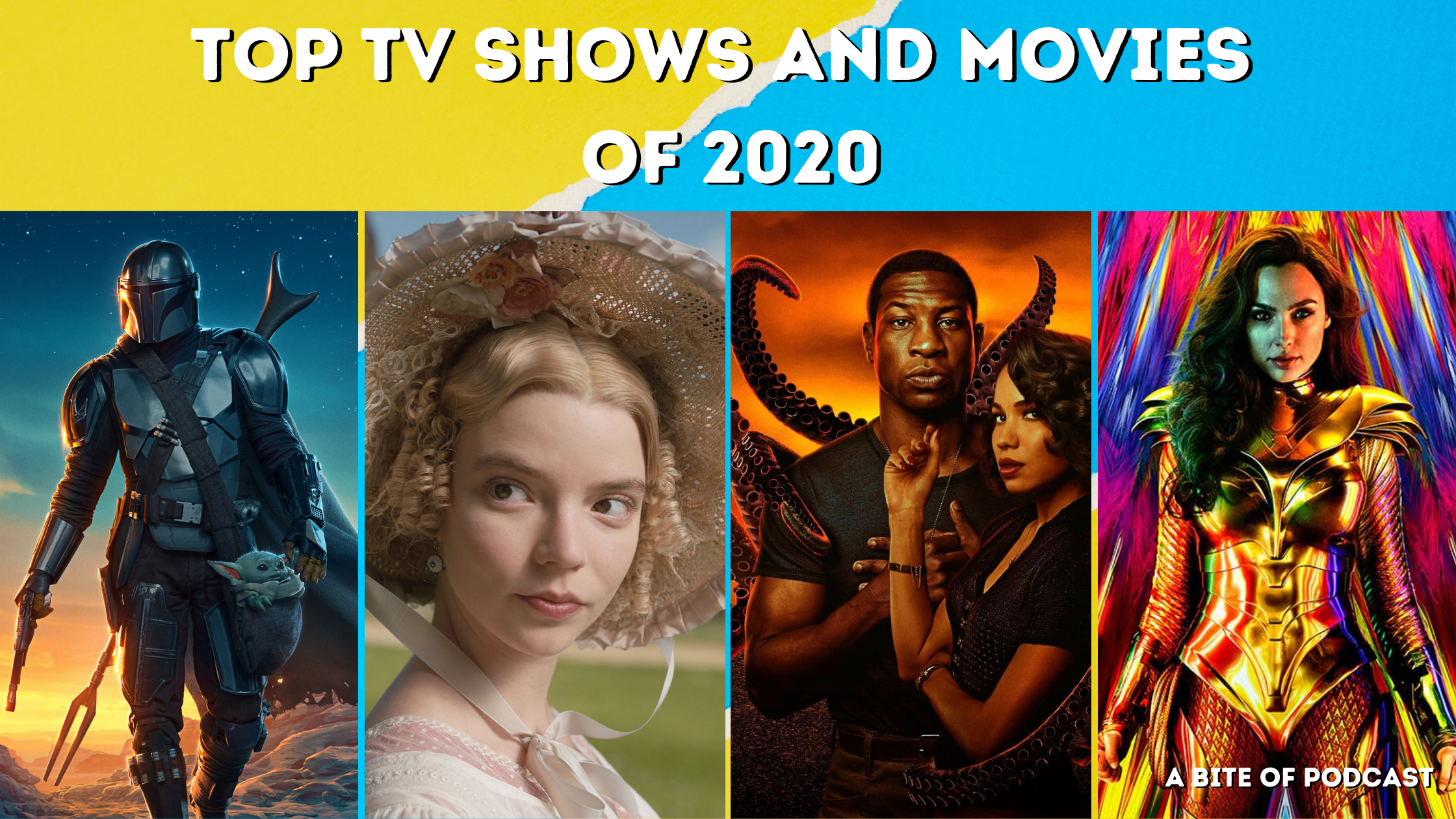 Here is our final Top List of 2020. This time we rounded up our favorite TV and Movies that stood out to us. What made your list?

Director Autumn de Wilde makes an energizing and insanely stylish adaptation of Jane Austen’s work. Anya Taylor-Joy plays the lead Emma with spirited wit, cockiness, and emotion that makes her so believable in the role. In the film, Emma Woodhouse wants to find a suitor for her lovesome companion Harriet Smith (Mia Goth) while struggling with her own feelings for her sister’s brother-in-law, George Knightley (Johnny Flynn). This is probably one of the better classic book adaptations in a long while and whether you are a fan of the source material or not, it's worth the watch!

A musical turned YA novel turned back into a musical for Netflix might sound like a conundrum, but I have to say I greatly enjoyed the movie version that was released in early December. There were rumblings of James Corden’s portrayal of a gay man being problematic, and I will admit he made some stereotypical choices but is it ok as a person who identifies as a gay man to overlook his characterization for the message of the movie as a whole? I’m going to say yes because I ended up with tears in my eyes multiple times while watching Prom. A teenager in Indiana named Emma wants to attend the titular prom with her girlfriend, but the conservative PTA at her school won’t allow it. The barring of Emma from prom receives national attention and catches the eye of four down and out Broadway actors who are looking for a cause to support to help launch them back into the limelight. Musical numbers abound the main message of Prom is one of love and acceptance and the bravery it takes to truly be yourself in a world that is telling you you are wrong. Emma’s journey is emotional and real. Prom made me laugh, cry, and all that other good stuff.

Technically this came out in 2019, but Noah and I were having your run of the mill boring quarantine night in 2020 and decided to give the rom-com a chance. The story follows friends Alice (Maya Erskine) and Ben (Jack Quaid) as they decide to be each other plus one at a number of upcoming weddings. Alice’s long term relationship has recently ended and Ben can never seem to find his one and only. The pair come to see that they really enjoy spending time with each other and romantic comedy ups and downs occur including, but not limited to jumping in a pool with clothes on, a romp in a cemetery, a misunderstanding that leads to a fight, and many awkward wedding toasts. I am absolutely in love with Maya Erskine’s Hulu show PEN15 so it was exciting to see her in another role. Not to mention there is a cameo by her PEN15 co-creator and co-star Anna Konkle at a wedding reception. Highly recommend this if you are feeling like you need a light love story with a few laughs thrown in.

Wonder Woman's first film outing lit the box office on fire and raised the quality bar for superhero cinema. The highly anticipated sequel was released on HBO Max and in select theaters on Christmas Day 2020. This time around we find Diana played by Gal Gadot in the ’80s where she is still saving people in a glorious Wonderful fashion. If you have ever had the pleasure of reading a Wonder Woman comic you know that there is more to her than being a badass warrior, she is love, truth, and has a huge heart. Patty Jenkins decided to dive deeper into those parts of her this time around. We are finally introduced to a live-action Barbara Minerva AKA Cheetah played by Kristen Wiig and the egomaniac Maxwell Lord played by Pedro Pascal. Wonder Woman 84 is filled with so much emotion and heart that in the end, you understand her on a deeper level than before. From the two cold openings to having to say goodbye to Steve Trevor...AGAIN, Patty Jenkins pushed the envelope for what a superhero movie could be. This is exactly the type of movie we needed in 2020, no wishing stone required!

Birds of Prey (and the Fantabulous Emancipation of One Harley Quinn)

From the start, you can tell that Cathy Yan had a blast making the film and it just so happens to be a blast to watch! After the not so great 2016 Suicide Squad, we were introduced to Margot Robbie’s Harley Quinn, which is arguably the best part of that film. Birds of Prey built Harley Quinn into a more 3-dimensional adorable psychopath that you just wanna have a drink and blow stuff up with. While Robbie is infectious in the candy-colored chaos, we are introduced to the badass songstress Black Canary, played by Jurnee Smollett that acts as the driving force (but not limited to) of the plot having direct connections to the film's villain, Black Mask (Ewan McGregor). We meet the socially awkward Huntress played by Mary Elizabeth Winstead, that is more stoic and comes and goes as she pleases. Rosie Perez’s Renee Montoya is a bit underdeveloped as a former Gotham City police detective but finds new purpose in the end. Finally, Ella Jay Basco, the teenage pickpocket Cassandra Cain, draws all our gals together when she steals the film’s MacGuffin – a valuable diamond. The fight scenes are insane and colorful and in the end, you fall for everyone including the villain. These birds take flight and I can't wait to see where they land!

A sub-genre of the reality archetype that has eased me through 2020 is that of the reality baking competition! Nailed It, Sugar Rush, and Zumbo’s Just Desserts are good, but nothing beats The Great British Baking Show. If you are unaware of this show all you need to know is there is a tent in the English countryside where amateur bakers come together for three challenges in an episode. At the end of each one person becomes the Star Baker and another is eliminated. It has plinky music that makes you feel cozy and safe. There is no cut-throat nonsense like in American competition shows - they are just there to bake, sip tea, and try their best. The most recent season was extra special because the bakers and show crew all quarantined for two weeks so they could produce a season during the pandemic. Although my favorite didn’t win, it didn’t matter because The Great British Baking Show is joyful no matter the outcome.

I never knew that a story about a metal man and an elvin alien would melt my heart over and over again. Season 3 of A Bite Of centered on the second season of The Mandalorian and we had lots of thoughts about the ever-evolving relationship of Din Djarin and Grogu (once lovingly known as Baby Yoda). We saw the pair travel the galaxy to try and reunite Grogu with his kind. Along the way, they met new allies like Ashoka Tano (played perfectly by Rosario Dawson) who shared that Grogu needed to meet a Jedi to train him. We were also introduced to Bo-Katan, Cobb Vanth, and, in my opinion, one of the best new characters - Frog Lady. While I'm not sure where Season 3 of The Mandalorian will take us I am both nervous and excited to see. Quick thought: How will Mando get around without Razor Crest? Have a listen to Season 3 of A Bite Of here!

The Haunting of Bly Manor

“Here are our hearts,” we said. “You’ll take care of them, right?” we asked trepidatiously. The Haunting of Bly Manor promptly took them and then STOMPED ALL OVER THEM! We spent Season 2 of A Bite Of talking about the second series in Mike Flanagan’s The Haunting series. Our cast of characters included the American governess Dani (played by returning Hill House favorite Victoria Pedretti), the charming gardener Jamie, the witty cook Owen, the sweet head of the house Mrs. Grose, and the dastardly Peter Quint. The Haunting of Bly Manor has scary ghosts both out in the open and hidden in the background, an evil Lady of the Lake, and most surprisingly a love story. The Haunting of Bly Manor had all of the jump scares we asked for and then gave us the heart and heartbreak we didn’t know we wanted. To hear what we thought about all of the twists and turns of the series click here!

Lovecraftian horror meets Pulp noir in a series perfectly suited for the madness of the year 2020. This HBO series mixes paranormal, horror, and social hatred to comment on American race relations. Set in the Jim Crow era of the 1950s, it has America’s racist history at the center of the story. On top of that, the series continuously shifts from episode to episode, starting with a road trip, a haunted-house story, an Indiana Jones-style hunt for treasure buried beneath a museum, and more, each equally nutty and, at times, nearing absurdity in the best possible way. Lovecraft Country based on Matt Ruff’s novel mixes so many genres and overflows with race, class, and social issues. The cast is outstanding but ultimately, it is a family drama about hope and freedom, with time, space, and horror tropes throughout.

To hear our episode by episode breakdowns of The Haunting of Bly Manor and The Mandalorian S2 be sure to subscribe to the A Bite Of podcast! Available anywhere you get your podcasts!